It’s been a surprisingly busy month for HubSpot. Historically, July and August have been fairly quiet on the product announcement front, as we inch closer to the INBOUND conference in Boston (typically held in early September). This year though, HubSpot have continued the relentless pace they set in the first half of 2020, furiously iterating on existing features and casually dropping some exciting new ones.

We’ve been keeping a close eye on all of the latest news, updates and announcements throughout July, and below you’ll find our thoughts and initial reactions regarding a few of our favourites.

Save Drag & Drop Emails As Templates

HubSpot released their drag and drop email editor in early 2018, and this new, simplified experience was incredibly well received upon launch. However, one glaring omission was the ability to part-build an email with your preferred branding and then save it as a template. Each new email build was essentially a hard reset, with colours, styling and imagery (such as your logo) needing to be redefined every time.

That is no longer the case, as HubSpot have now added the ability for you to create a bare bones version of your email with all of the style settings just the way you like them, and then save that email as a template for future use. To do this, click the Actions button in the top right of the email builder, and select ‘Save email as template’.

Once you’ve done this, a new Saved templates section will appear under the Drag and drop tab on the Select a template page, meaning you no longer have to start from scratch every time you want to send an email.

The last I heard from HubSpot about this feature it was in public beta, but it has showed up in our own portal at some point in the last few days, so I’m guessing (🤞) it’s now live and officially out in the wild.

Pretty excited about this one - it was one of the ideas I included in my INBOUND Product Spotlight Wish List article from last year, and I’m thrilled that the HubSpot team have now added it.

If you’re a HubSpot admin, managing Meetings links has always been a bit of a pain in the butt, as there hasn’t been an easy way to configure or edit them on behalf of your users. Previously you would need to collect everyone’s username and password, log into each account individually, connect the users calendar (requiring another password), and then setup the Meetings tool for them.

That changes as of this month, with HubSpot adding the ability for super admins to create and edit Meetings links on behalf of other users. If you head over to the Meetings tools, there’s now a menu at the top left of the page where you can select which user you’d like to edit a meeting module for. Select the relevant user, and then continue on as you normally would. 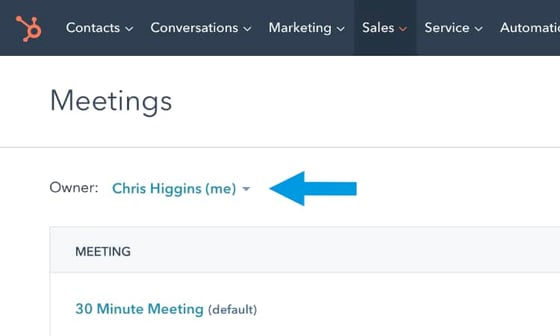 Whilst you’ve always had the ability to set a delay in a HubSpot Workflow, historically the length of time you could delay a workflow for was relative to the action immediately prior to said delay - X number of minutes, hours or days. Workflows power users have been clamouring for more sophisticated functionality with regards to delays for a number of years, leading HubSpot to add two brand spanking new delay actions.

The first, is the ‘Delay until a day or time’ action. With this action, you can delay a workflow until a day of the week, a specific time of day or a combination of the two. So if there are specific actions or communications that you only want to happen on a Tuesday at 3:00pm, you can now use the delay until a time or day action to facilitate that. The other great thing about this is that it can leverage the contact’s time zone data (assuming HubSpot knows it) to ensure communications are sent at the right time in each country / region.

The second (and my personal favourite of the two) is the ‘Delay until event happens’ action. With this action you can pause a workflow entirely, until such time as a particular event has occurred. The three “delay events” currently available are page visited, form submitted or property value changed, meaning if you’ve got a contact who you’re trying to nudge towards a particular goal, you can now delay your workflow until they have taken that action, whether it takes them a day, a week, a month or a year.

For a closer look at this feature, check out this quick video:

Clone & Reorder If / Then Branches

Speaking of workflows, HubSpot have also improved upon the if / then branching update that was released a while back by adding the ability to not only clone if / then branches, but also to reorder them in the visualisation of the workflow.

The cloning feature could come in particular use if you want to send different contacts down similar, but not entirely identical, branches. You can now build your initial branch, and instead of recreating it from scratch a second (or third or fourth) time, you can simply clone the initial branch and make any of the adjustments required.

A couple of solid updates to the Sequences tool have dropped this month.

Firstly, HubSpot have made some changes to the way that Sequences behave with regards to business days versus calendar days. The Sequences tool has always been smart enough to prevent emails from being sent and tasks from being created at weekends, however Saturday and Sunday were still being counted as days between steps. This led to a disproportionate number of actions occurring each Monday, because all of the sequence actions from the latter half of the previous week were backlogged, waiting until everyone was back in the office on Monday before they could fire.

Following this update, any sequence with the “business days only” setting enabled will only count business days when determining when to perform the next action. So if your sequence begins with an email followed by a three day delay and then a follow-up email, and you enroll a contact in that sequence on a Friday, they won’t receive email number two until the following Wednesday.

In addition, HubSpot have also added the ability to bulk unenroll contacts from sequences. In the past, unenrollment was only possible one contact at a time. If, for whatever reason, you need to quickly unenroll a batch of contacts from a Sequence, simply navigate to the sequence in question, scroll down to reveal the list of contacts enrolled, select which contacts you wish to unenroll and then tap the ‘Unenroll contacts’ button.

This is very much a “does what it says on the tin” kind of update, but incredibly useful nonetheless. If you’re writing your blog posts in Google Docs, you can now import your content straight into the HubSpot blog editor.

I’ve only tested this briefly, but was very happy to discover that all of the appropriate markup like paragraph, strong, and list tags are automatically added to the content as part of the import. Terrific new addition that will save many a content manager a bunch of time.

It’s now possible to manage permissions for whether a user has the ability to upload, edit or delete files within the Files tool. The file manager has become an increasingly important tool in HubSpot, particularly since the launch of CMS Hub, so it’s great to see HubSpot giving admins greater control over who does and does not have access to this part of the platform.

For as long as I can remember, HubSpot has included a feature called ‘HubSpot Insights’, which populates company records / properties with publicly known information (typically sourced from social channels, websites and sprinkle of crowdsourced data collection).

Whilst this doesn’t appear to be _exactly_ the same feature, HubSpot have added the ability to update contact records in a similar way, giving any user who has their personal inbox connected to HubSpot the option to enrich contact records with additional data. The HubSpot API is responsible for the heavy lifting here, doing some magical jiggery-pokery in the background by scraping data from the body and signature of incoming emails and then associating said data with the matching contact.

As things stand this feature works for the following contact properties - first name, last name, phone number, job title, mobile phone number, fax, city, state, country, zip code and street address. And in order not to fall foul of GDPR / privacy laws, HubSpot have limited this feature to contacts who already exist in your CRM, and the feature can easily be disabled by going to Settings > Contacts & companies > Contacts and switching off the ‘Automatically capture contact details from emails with HubSpot AI’ option.

That’s all for this month! We’re anticipating a relatively quiet August features wise, whilst HubSpot put the finishing touches on all of the new toys ready for release at INBOUND 2020, but we’ll keep you posted on anything the crops up.

Chris Higgins is the founder and managing director of Electric Monk.