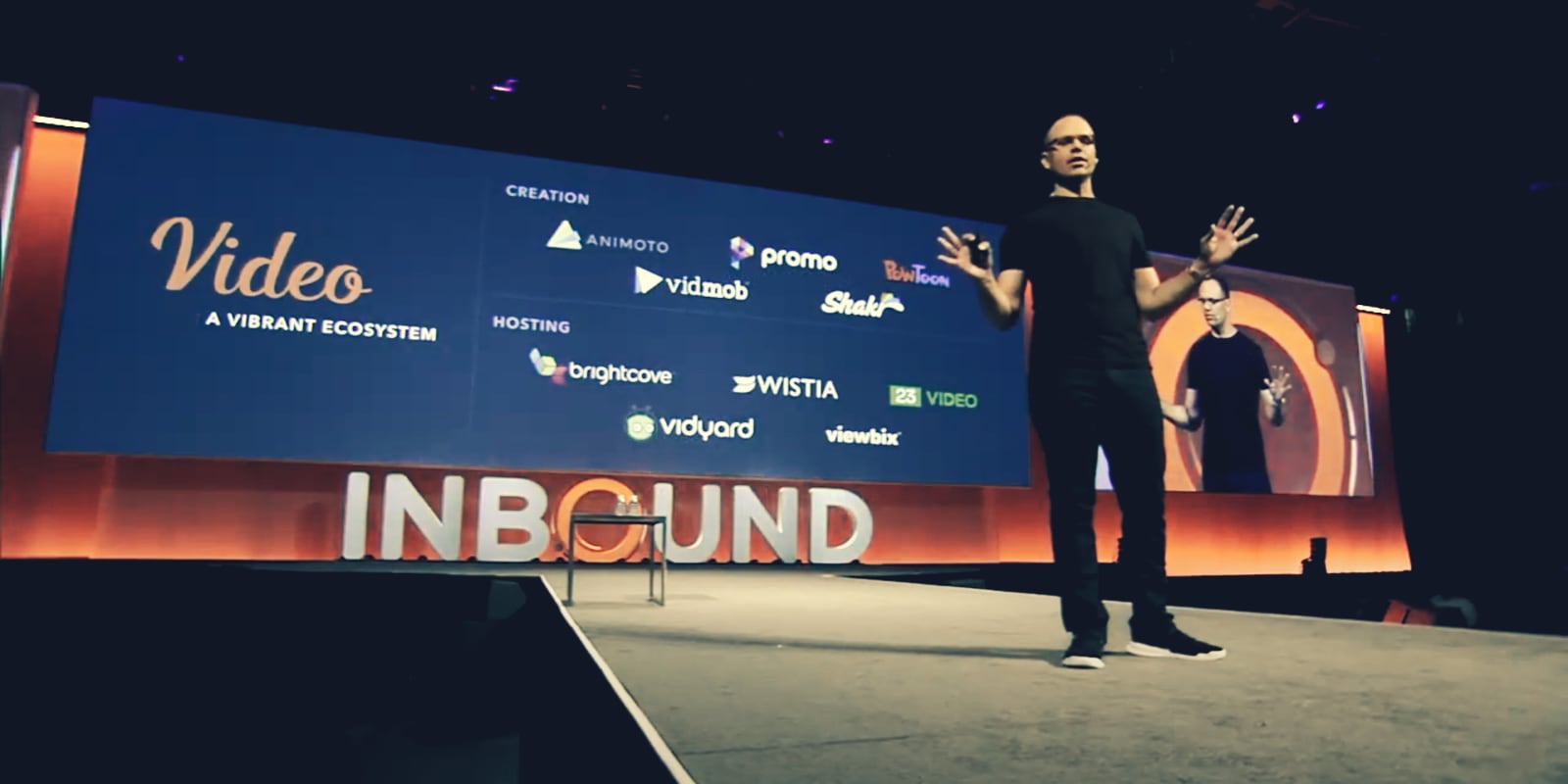 The HubSpot Product Spotlight was one of my favourite sessions at the INBOUND event in 2016. Presented each year by HubSpot’s VP of Product, Christopher O’Donnell, the session outlines the company’s product road map for the next 12 months, and provides some insight into where HubSpot believes the future of marketing and sales technology is headed.

Unfortunately I couldn’t be there in person this year, so last Tuesday evening saw me sat at my computer like a (somewhat geeky) kid on Christmas eve, eagerly awaiting the live stream from #INBOUND17 in Boston.

As always, there were a tonne of exciting features and improvements announced across the entire HubSpot product line, but for this recap I’ve picked six of my personal favourites and covered them in a bit more detail.

Ecommerce has historically been one of the (few) areas of online business where the use of HubSpot has never added a great deal of extra value. Most ecommerce applications can handle transactional emails such as order and shipping confirmations, along with report generation and other "essentials". This meant that if you run an online store and only need the basics, HubSpot was probably not going to fit your requirements.

In addition, despite HubSpot having always had the power and potential to do some incredible stuff for ecommerce, getting all of the required data into the system has traditionally been a bit problematic.

To solve this, HubSpot have built a native integration with Shopify. If you’re a Shopify user, you can now sync all of your products and attributes directly to your HubSpot account. Purchases will show up inside HubSpot as Deals, and you will be able trigger and track order confirmations, shipping notifications and a host of other communications right from your HubSpot portal.

Having this data inside HubSpot will enable companies to do some seriously cool stuff, such as remarket to existing customers, send cart abandonment emails and easily generate accurate reports on customer lifetime value.

In addition to the native Shopify integration, HubSpot announced ‘Ecommerce Bridge’, a new set of APIs that will allow other ecommerce providers to build their own HubSpot integrations.

"Ecommerce Bridge is an exhaustive new set of APIs that our ecosystem partners can use to integrate almost any ecommerce system under the sun with HubSpot. So we expect there to be a vibrant ecosystem of commerce partners in the coming year." ⁃ Christopher O’Donnell (HubSpot VP of Product)

The third, and without question the most exciting, is the ability to sync your HubSpot smart lists directly to Facebook in real time. This feature will not only enable you to display Facebook ads to your contacts depending on which smart list/s they’re a member of, but also allows you to create (and advertise to) “lookalike audiences”.

A Lookalike Audience is a way to reach new people who are likely to be interested in your business because they're similar to your best existing customers. When you create a Lookalike Audience, you choose a source audience and we identify the common qualities of the people in it (ex: demographic information or interests). Then we find people who are similar to (or "look like") them. - Facebook

Combining the sophisticated segmentation features available in HubSpot with the advertising capabilities of Facebook is HUGE. Take the Shopify integration already highlighted above - you could add your recent cart abandoners to a smart list, and then use Facebook Retargeting to show those contacts Facebook ads that feature a discount code or a special offer.

Back at INBOUND 2016, HubSpot launched a stack of powerful marketing automation features, including a much requested visual workflow builder. This year, they announced that they're bringing similar automation features to HubSpot Sales Professional.

This is massive news if you’re a HubSpot Sales Pro user, as it will (should) enable you to use the data that is in your HubSpot portal to automate many of your day-to-day tasks.

During the keynote, Christopher O’Donnell gave three specific examples of automated workflows that you will be able to create with these new tools:

Full details regarding the specific enrolment criteria and actions that will be available are still scarce, so I’m keen to see which ones make it across from the marketing side, as well as what CRM specific automation is added. Triggering one-to-one / tracked emails wasn’t mentioned in the keynote, but there are dozens of instances where this would be useful (such as sending an email to a contact after they’ve booked a meeting), so fingers crossed this is included.

CRM automation is part of what HubSpot are calling their “grown up” Sales Professional product, which is designed for businesses who require more sophisticated CRM functionality, and will be launching alongside a host of other new features on November 1st. There will be a price increase, but if you’re an existing HubSpot Sales customer (or you become one before the end of October), you’ll get the new functionality for the same price that you’ve already been paying.

Inbound is all about providing a remarkable experience for your customers, but the tools that HubSpot have offered up until now have been largely aimed at serving subscribers, prospects and leads. This year, they announced the Customer Hub, which is described as “a whole new way to make your customers deliriously happy”.

Whilst it’s not yet entirely clear what this tool will do, it sounds like it’s a mix of a support inbox, a knowledge base and customer sentiment tracking tool. And just like they did with their CRM, HubSpot are making the basic functionality of the Customer Hub free.

The Customer Hub is coming in 2018, so it will be interesting to find out just what features and functionality are included in the lead up to launch.

Back in April of this year, HubSpot launched Messages, a tool that enables Sales Pro customers to chat live with their website visitors. And whilst Messages is certainly a welcome addition to the CRM product, it lacks a few of the core features (such as integration into the HubSpot mobile app) that other live chat services currently offer as standard.

Nevertheless, HubSpot are investing big in messaging and chat, and it looks like there are some very cool updates on the way over the next six months or so. Messages looks set to be rebranded as ‘HubSpot Conversations’ - a “new, collaborative, multi-channel inbox, built for teams who want to get messaging right”, and will focus on three key areas:

Chat is good when powered by humans, and chat is awesome when powered by humans with machine learning and artificial intelligence. We see bots evolving - much the way that email turned into marketing automation - we see bots taking messages and driving it into the future of conversational automation. ⁃ Christopher O’Donnell (HubSpot VP of Product)

The week before INBOUND 2017, HubSpot announced that they had acquired Chicago chatbot startup Motion AI. Founded in 2015, Motion AI is a visual chatbot builder that enables simple creation of chatbots for web, Facebook Messenger or Slack, without the need for any coding knowledge or programming skills.

It's impossible to ignore the impact of chat and messaging, not just on the way B2B companies operate, but on society as a whole. We're in the midst of a massive shift as businesses embrace this new platform and consumers come to expect more immediate, always-on communication from brands. HubSpot's mission has always been to build technology that helps SMBs grow and evolve with changing consumer behaviors, and acquiring Motion AI is another great step in that direction.

With Motion AI, HubSpot users will be able to create conversational chatbots (like this one) that combine automation with messaging, but don’t require a human team member to be available to respond 24 / 7. These chatbots can be deployed by businesses incredibly quickly, and customers can then use them to access information, book meetings and have their questions answered.

Here’s a screencast that demonstrates how the Motion AI platform worked prior to the HubSpot acquisition:

The Motion AI technology will be incorporated into HubSpot over the next few months, and HubSpot Conversations is launching at some point in 2018.

HubSpot’s 2016 product spotlight was primarily about iteration and building a simpler, more powerful version of the existing product. This year, the company is laying the ground work for what it is betting is the future of marketing, sales and customer service technology. Exciting times ahead! 😊

Which new HubSpot features and functionality are you most excited about?

Who is this guy?

Chris Higgins is the HubSpot nerd behind Electric Monk. When he’s not finding HubSpot interesting so you don’t have to, he enjoys spending time with his wife and dog, and partaking of high quality pop culture. Michael Jackson never came over to use Chris’s bathroom, but his sister did.